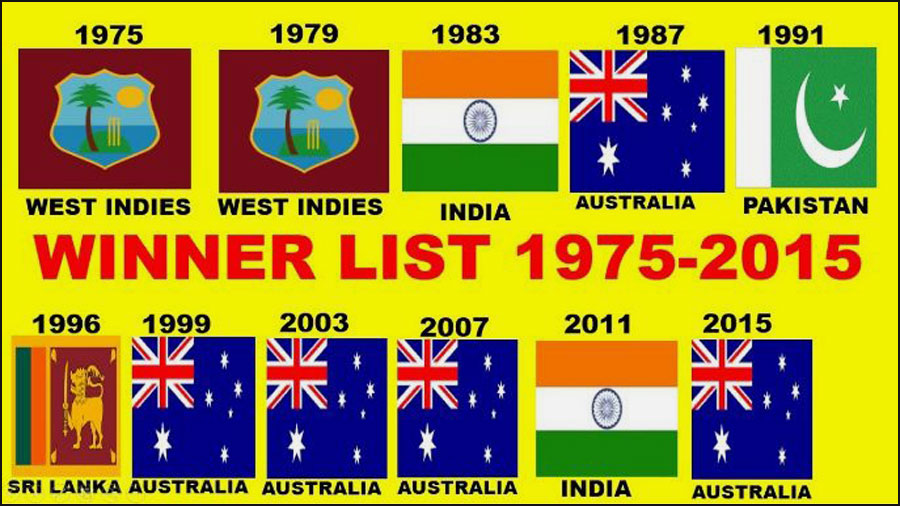 A Gala Events of Cricket competition of ICC World cup who organizes by the ICC – International Cricket council in Span of 4 Years since 1975 to till date. Here on this article we will be share the complete information about ICC Cricket world cup Winners, Runners up Team for All the Edition of 1975-2019 till date.

Most Recent Edition of ICC World cup was played in 2015 where Australia Beat New Zealand and Win the Fifth Trophy of the World cup Competition. Upcoming CWC tournament was schedule to played from the 30th May 2019 in England & Wales.

Check out below the List of Winners and Runners up of ICC Cricket world cup year by year.

IF we look at the All Edition of Cricket world cup champions then Australia cricket team is the most successful team in the ICC world cup tournament as they became the Champions five times in 1987, 1999, 2003, 2007 and most recently in 2015. Apart of them India and West Indies won the 2-2 trophy each while West indies won the First two cricket world cup in 1975 and 1979. Pakistan is the Winners of 1992 Cricket world cup and Sri Lanka won the 1996 ICC World cup trophy.

ICC World Cup Winners according countries with no. of titles

Winners in Brief (Year by Year)

In the 1975 ICC World cup Final West Indies beat Australia and became the Champions of the Inaugural Edition of the Cricket world cup Tournament. WI won by 17 runs in the Final game at Lord’s London. Clive Lloyd was named man of the match in final Game of 1975 world cup.

In the Second World cup West Indies beat the England and won the Trophy of 1979 ICC World cup Final. WI beat England by 92 run in the Final game at Lords ground and on that match Sir viv Rchards was pick as a Man of the Match for that final game.

1983 ICC world cup is special one for the Indian as they Beat the West indies in the 1983 ICC cricket world cup Final and became the champions First occasion in the tournament. India beat West indies by 43 runs in the Final at Lords and Mohinder Amarnath was awarded as man of the match for 1983 world cup final.

In the 1987 ICC world cup Final Australia beat England and grab the First world cup Title. Australia won that game by only 7 runs in the final which will be hosted at India’s Eden Gradens Venue. David Boon was declared man of the match in final.

By Beating the England in the 1992 ICC world cup Final, Pakistan made a history to won the World champions of the competition. PAK beat Eng with 92 runs in the final at Melbourne cricket ground and wasim akram declared as Man of the match for that Final game of 1992 world cup.

Sri Lanka Who beat the Australia in the final match of the ICC world cup 1996 and win their first title of the competition. SL won that Final Match by beating the Australia by 7 wickets at Gaddafi stadium at Lahore. Aravinda de Silva was declared man of the match in final. Sanath Jayasuriya Was pick as man of the series for that tournament.

Australian won their second World cup Trophy to win ICC world cup final. AUS beat 8 wickets in the final match which was played at Lord’s london. Shane warne was announced as Man of the Match in the final game. Lance Klusener was man of the series for that game.

In the 2003 ICC world cup tournament Australia beat the India in the final game and became the Third time champions of the cricket world cup. Australia won by 125 runs on that match which played at Wanderes stadium of Johannesburg. Ricky Ponting was awarded man of the match for the final game whereas Sachin Tendulkar awarded with man of the series trophy for the 2003 world cup.

Australia who made a word records by beating the Sri lanka in the 2007 World cup final as they clinch the Cricket world cup title third in a row. Australia won that game by 53 runs as per D/L Method. Adam Gilchrist was announced man of the match and Glenn McGrath was awarded to Man of the series.

Australia who beat the New Zealand in the Final match of the 2015 ICC world cup by and won the fifth trophy of the cricket world cup competition. This 2015 World cup final match was played at Melbourne Cricket ground on 29 March. Australia won that game by 7 wickets. James Faulkner was pick as the man of the match while Mitchell starc was player of the series for the competition.

Upcoming 12th Edition of the ICC cricket world cup competition which will be schedule to begin from the 30 May 2019 in England. Australia are the defending champions of the competition.